In compliance with the orders of Islamabad High Court, PTA has issued a notification to all Telecom Operators in Pakistan to stop the Inami / Prize schemes with immediate effect. The directive requires the telecom operators to submit the compliance report to their office no later than March 21, 2013 (today). 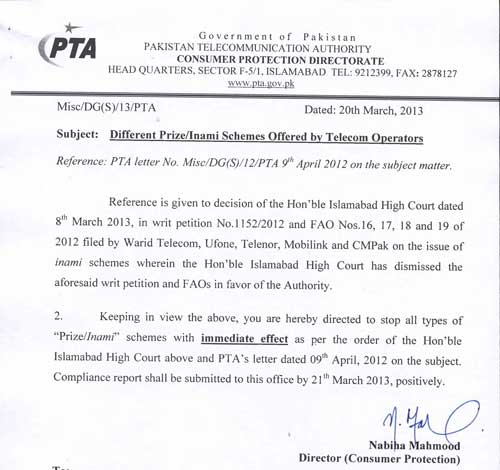 Taking up on its threat Telecom companies – Mobilink, Ufone, Warid Telecom, Telenor and Zong challenged the PTA directives in the IHC. The Court after initial hearing had issued a stay order in favor of cellular companies, but later ruled against various prize schemes offered by Telecom companies in the country and declared them against the interest of consumers.

After the court orders counsel for cellular companies told the schemes cannot be stopped immediately as there were many stakeholders involved who were working together after having lawfully agreed on the terms and conditions as per law of the land, but now it seems like they have to shut down all these schemes immediately.