The 6th Annual Pakistan Telecommunications Conference 2013 (TeleCON 2013) closed at the Marriott Hotel Karachi, with a resolution passed to speed-up deployment of new technologies and celebrate Pakistan’s IT potential and success, both on the local and international fronts. Participants from a cross-section of government, corporate, business, social and academic organizations attended the conference. 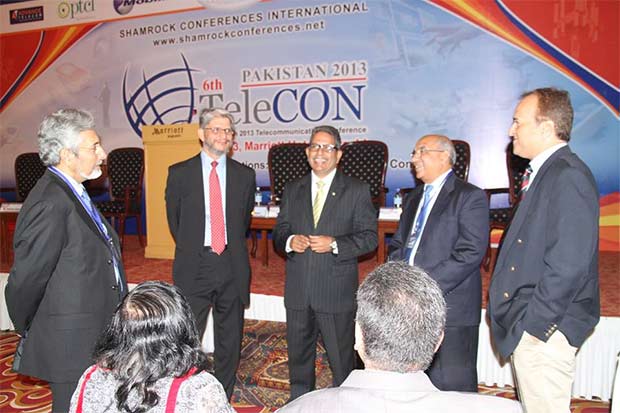 Distinguished speakers and panelists outlined specific areas of development and shortcomings and concluded that Pakistan was today among the slow-starters in deployment of new technologies whereas, globally countries had migrated from 3-G/LTE to 4-G and beyond. It was not too late to embrace the changes.

“Whatever the problems have been, we need to leave the past behind and move on, we have an opportunity here so let’s take the next steps for the benefit of the people of Pakistan,” said Furqan Qureshi, SEVP, PTCL in the Thought-Leadership forum, an exclusive by Shamrock, and moderated by the prolific Salman Ansari, former advisor to the ministry of IT and telecommunication. Aamir Zafar Choudhry, Director-General IT, Punjab IT Board, and Ms. Jehan Ara, President, P@SHA cited Pakistan’s great IT potential and called for its recognition.

Javed Jabbar, former minister and senator, in his keynote address characteristically presented a holistic picture of the telecom and IT sector and observed that it was important for the ‘new wave’ to have an impact in Pakistan not just in telecommunication but equally a ‘new wave’ in good governance in our national institutions, and more so to the four pillars of the state.

Earlier Menin Rodrigues, Chairman of TeleCON 2013 welcomed the delegates saying that the industry had shown remarkable performance trends and had created some truly empowering services, products and events; telephony, he said, had indeed changed and re-shaped lives in Pakistan.

The first session on “The Telecom Cloud Opportunity” was chaired by Dr. Khawar Khokhar, Ex-Director Technical, PTA. The speakers who spoke about cloud computing as a revolutionary advancement and a new concept in Pakistan, included, Mr. Babar Shahbaz Ahmed, Cisco Systems and Mr. Ashraf Kapadia, Advisor, Systems Limited. They said cloud computing was all about building a shared pool of configurable computing resources – network, servers, storage, applications and services, and provided better return on investment.

The closing session was a panel discussion on “Innovations in Telecommunication & Information Technology Sector” and was chaired by Mohammad Anwer Sheikh, Managing Director, Pakistan Software Export Board (PSEB) who represented the Ministry of IT & Telecommunication. The panelists included, Asadullah Choudhry, CEO, AUC Technologies, Ms. Seema Ansari, Head of Telecom Dept., Inst. of Business Management, and an industry perspective by Ms. Jehan Ara, President of P@SHA.