Daan Roosegaarde, a 36 year old entrepreneur from Netherlands has created world’s largest air purifier; which could be used to clear the air in some of the most polluted cities in world.

He got the idea of making one, when he first visited China a couple of years back. The smog in the environment made it impossible for him to enjoy his trip.

The air purifier shaped as a tower just had a pilot run in Roosegaarde’s hometown of Rotterdam, Netherlands.

How does it Work?

Using ion technology, the tower attracts and captures the small pollution particles PM2.5 and PM10. Then it releases clean air, leaving the surrounding area with air that is about 75% cleaner.

Basically, it’s like when you have a plastic balloon, and you polish it with your hand, it becomes static, electrically charged, and it attracts your hair.

The seven-meter high tower can clean around 30,000 cubic meters of air each hour and runs on just 1,400 watts of power, the same amount of power a regular tea kettle needs. 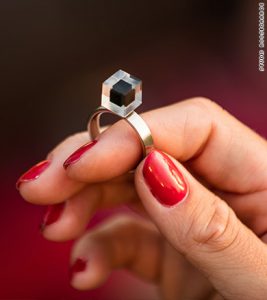 The tower doesn’t just clean the air, the smog collected in this process in used to make jewelry. hey’re put under high pressure for 30 minutes, sealed within a resin cube, and used in rings and cufflinks.

CNN Money reports that the first 1,000 rings and cuff-links have been shipped and people are asking for more.

After China, Roosegaarde plans to bring the tower around the world, Mexico City and India are destinations under consideration.