In the last couple of years, OPPO got phenomenal success in Asia and Africa, that’s because of change in its business strategy from making flagship devices to a shift towards affordable smartphones.

OPPO has already secured the top position in its home market, but with Selfie Expert smartphone series it is now aiming to become the favorite brand in countries like India, Malaysia, Thailand and Pakistan.

Last year’s OPPO F1s was a huge success here in Pakistan and building upon its reputation, OPPO has launched the F3 and F3 Plus recently – both with Dual Selfie Cameras.

While we have seen that F3 Plus is hefty device that also comes with a premium price tag, it might not appeal to everyone. However, the younger sibling F3 is a more affordable option, that carries the same DNA in a standard package. 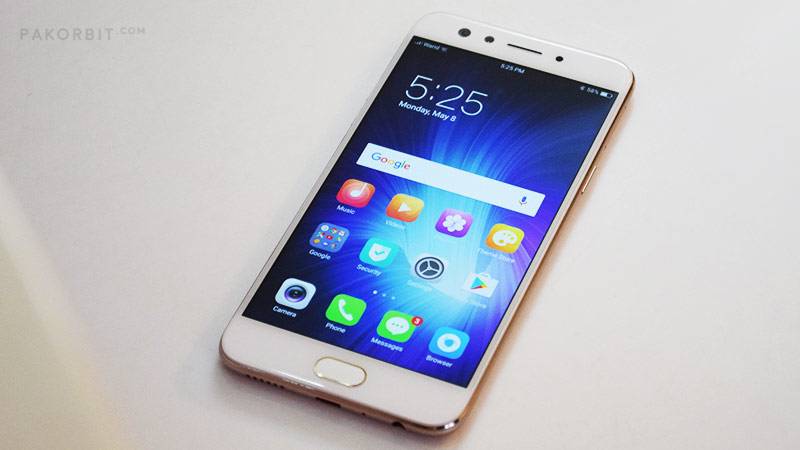 Today we are going to have a look at F3 and the focus will be on its design, performance and the dual cameras. We’ve already done the un-boxing review of this phone, do check out the video before reading the review below.

OPPO F3 takes much of its design inspiration from F1s and if there were no dual cameras, it would have been very hard to differentiate between the two.

However, it feels compact and the sides are a bit more curved, the matte metal finish with polished chamfers along the edges gives the device a premium feel.

I won’t say that this phone looks like an iPhone, because it simply doesn’t. The inspiration is quite visible but F3 has a completely different design, one that is universal among Chinese smartphone makers. 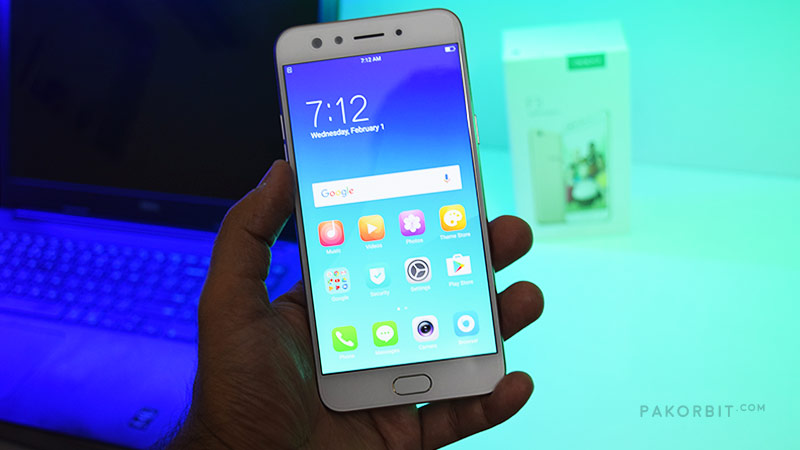 On the front it has a 5.5-inch screen with a 1080p resolution. There a 2.5D curved glass sits on top of the screen with Gorilla Glass 5 protection. It gives the screen a curved look and slims down the side bezels, but it is no way near to the actual curved screen found in Galaxy S7 edge or the Galaxy S8. 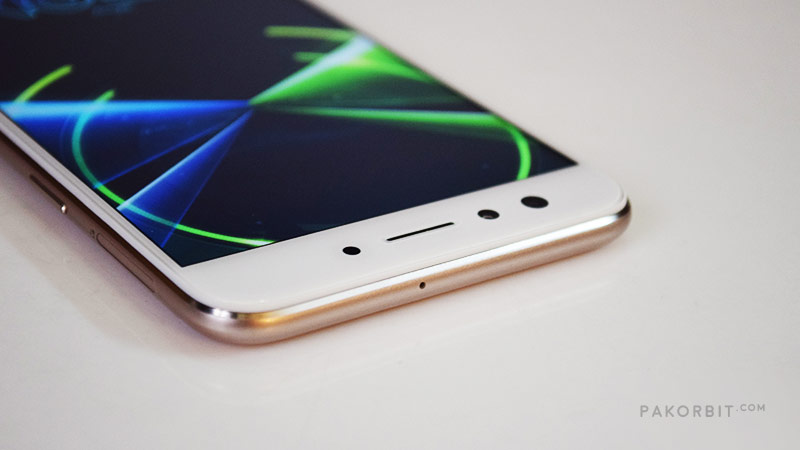 Despite the 1080p resolution, the screen looks quite sharp and produces vibrant colors, however the sunlight visibility is quite poor. The screen panel isn’t simply bright enough, however you get these different brightness options that makes it easier to look on the screen in the night and during prolonged usage.

The front side has a white panel which looks stylish, but I personally prefer the front side of the phone to be all black, so when the screen is off it looks ritzy and much more elegant.

Anyway, above the screen we have these two selfie cameras, the big one is 8-Megapixel wide angle and the small one is 16-Megapixel. Right next to the cameras there is the earpiece and a proximity sensor. This phone also have a notification LED (white color) on the left side of the cameras, but you won’t notice it if its not blinking.

Below the screen, OPPO F3 has a capacitive home key that also doubles as the fingerprint scanner. It has shape like a physical key but you won’t be able to press it. 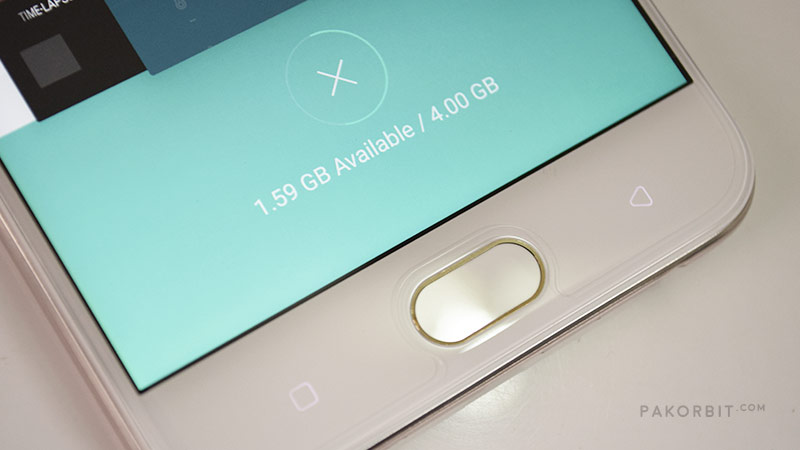 The app switcher and back keys are placed on the left and right side of this home button, both are dimly backlit when you press the home key – just like the notifications LED these keys are invisible when the phone is in idle mode.

Volume rocker is on the left and power key is place on the right. All of these keys are metal with nice clicky feedback. F3 features a tri-slot above the power key as well, which can take 2 nano SIM cards a microSD card at the same time. This is definitely a plus as not many phones out there have a dedicated microSD card slot these days. 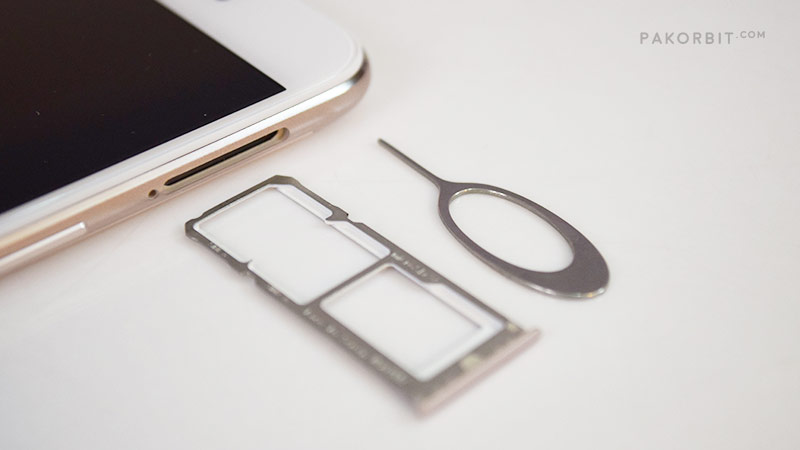 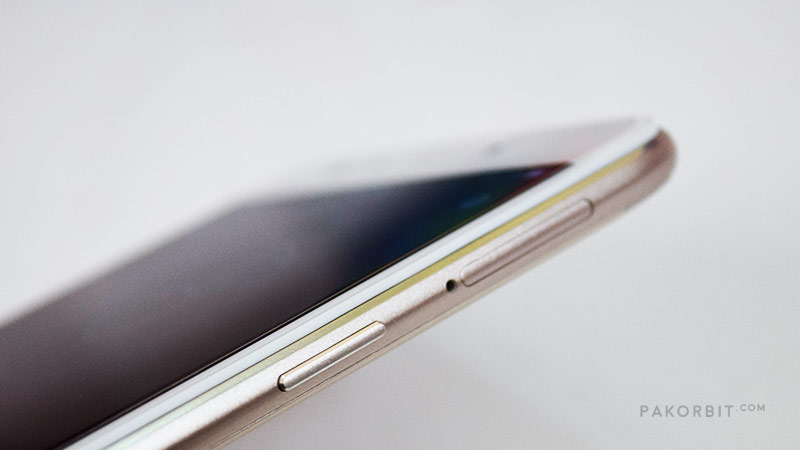 The top side only features a noise cancellation microphone, whereas the bottom houses a single loudspeaker, microUSB 2.0 port, microphone and a 3.5mm headphones jack. 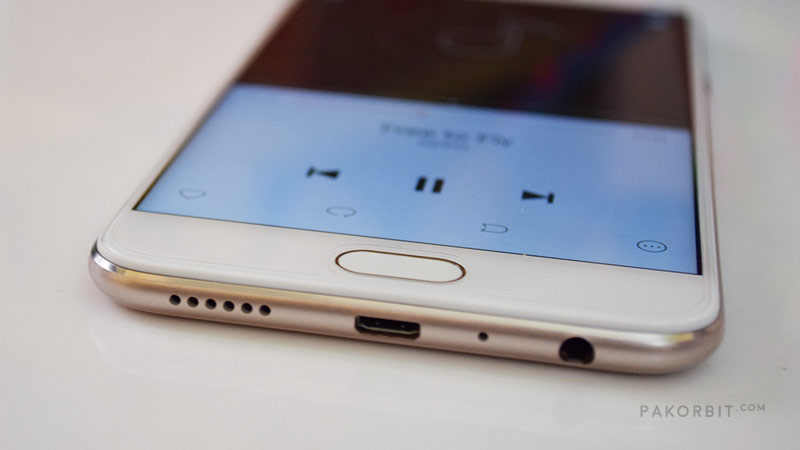 On the back, there is the primary 13-Megapixel camera that supports PDAF with a single LED flash. The camera module protrudes a little due to a metal ring covering the lens but it won’t wobble when resting on a flat surface. The camera lens also feature some kind of coating and has a green tone to it – just make sure to protect the lens against any kind of moisture, otherwise it can damage the coating. 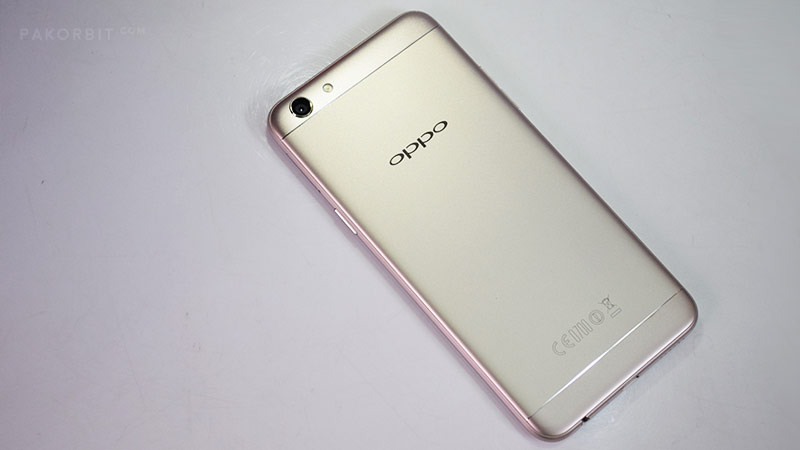 OPPO logo and some technical markings are laser engraved on the back panel made of aluminum. There are two plastic strips that sit on the top and bottom of phone for the antenna reception. OPPO did a job with the color matching, but the plastic is much more vulnerable to scratches and if you’re not using the back case, these two strips will collect tiny scratches very easily.

The overall design of this phone looks perfect, the weight is evenly distributed so I had no problems using it with one hand. The edges have a bit more curve than F1s, making it easier to hold and it offers more screen area as compared to its predecessor.