Last month Nokia officially launched 3 new Lumia smartphones 920,820 & 620 in Pakistan. We have got our hands on Lumia 920, the flagship smartphone from the Finnish firm, here is a brief review of this device. 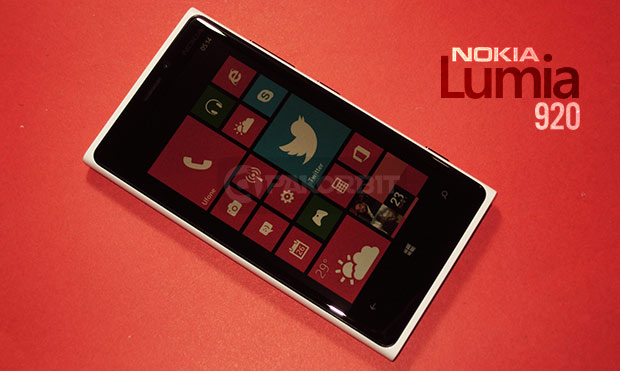 Lumia 920 is the successor of Lumia 900, which was introduced last year and follows the same design as its predecessor. It has the same polycarbonate unibody design that comes in a range of bright colors like yellow and red as well as black and white.

I haven’t tested it but I am sure that if you accidentally drop this phone it won’t take much damage – thanks to the sturdy plastic and Gorilla Glass 2. 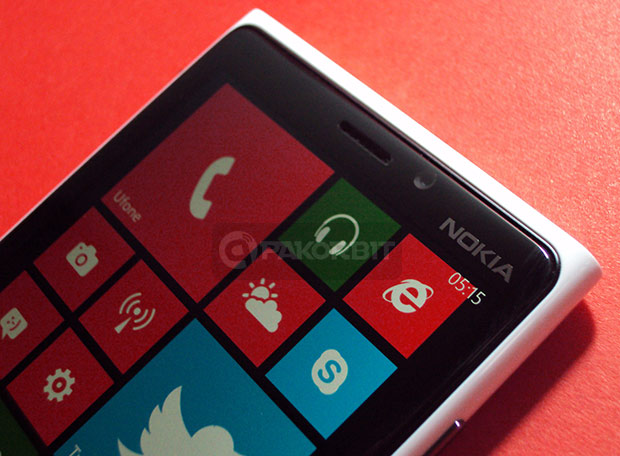 The Lumia 920 is a big phone, measuring 130.3 x 70.8 x 10.7 mm, the unibody polycarbonate design provides a premium finish, however its weight is noticeable. It weighs almost 185g but the rounded sides of the Lumia 920 provides a smooth and comfortable hold.

On the front we have got a 4.5-inch IPS TFT screen powered by PureMotion HD+ technology, which provides a crisp, bright display with HD resolution of 768×1280.

Above the screen there are Nokia logo, front facing camera and ear speaker. Below the screen there three touch buttons; back, Windows and search, which are quite close to the screen and you might accidentally press them while interacting with the screen. 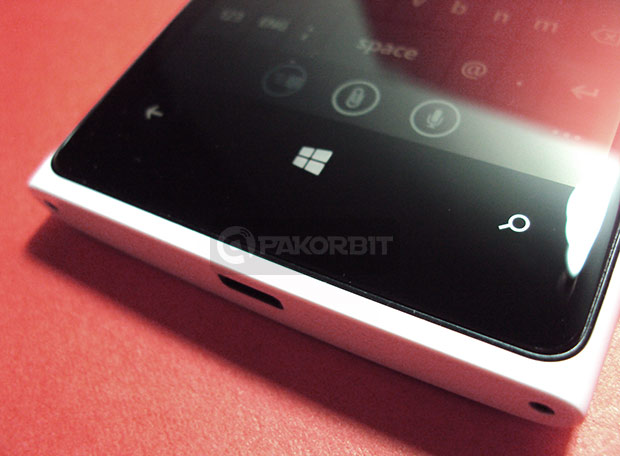 On top there’s a 3.5mm jack in the center, with a microphone and Micro SIM card slot. A pin is provided in the box to eject the tray. On the bottom you have a microUSB port with two speaker grills screws, in case your phone needs repair service. 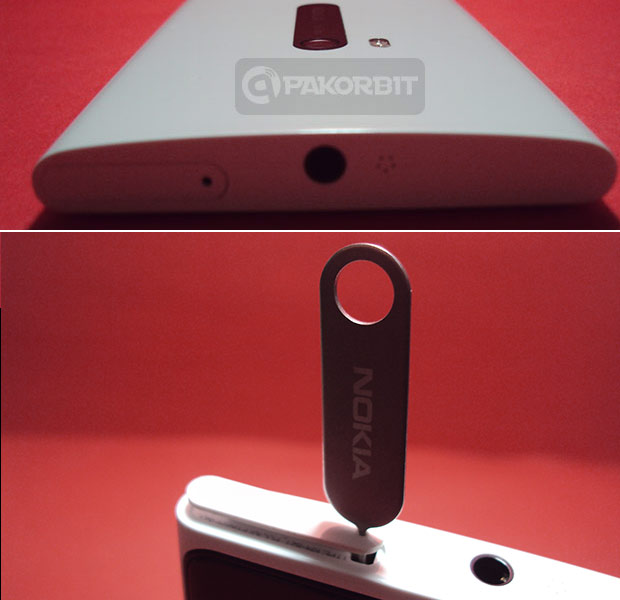 The left side of the Lumia 920 is untouched, on the right there’s the volume rocker, power/lock in the center and a physical two step camera shutter button towards the base – which is a distinctive feature of Windows Phone smartphones. 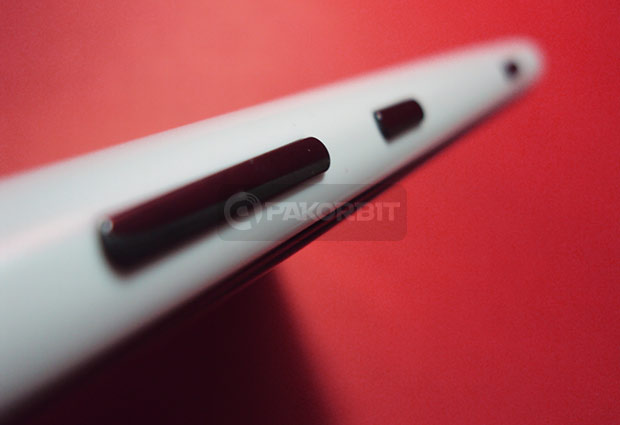 The back of phone is very identical to the Lumia 900, with centralized camera lens, silver plate surround and dual LED flash. The only difference is that now it also says Nokia instead of only Carl Ziess on the silver plate. 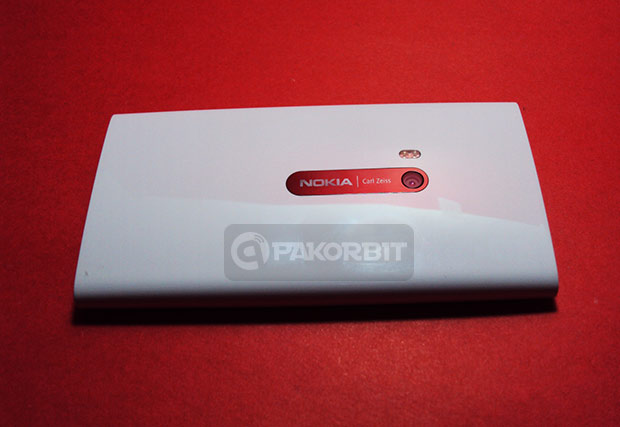 The phone runs on the latest Mobile OS from Microsoft, Windows Phone 8. The OS has improved a lot as compared to Windows Phone Mango (7.5). Now it also supports multi-core processors, Bluetooth file transfer, Screenshot and SD Card (this phone doesn’t have SD Card slot). Still there is no file manager or folder previews.

Nokia has also added some of its applications like App Highlights, Here Maps, Nokia Drive etc. and you can also download many additional apps for Camera. 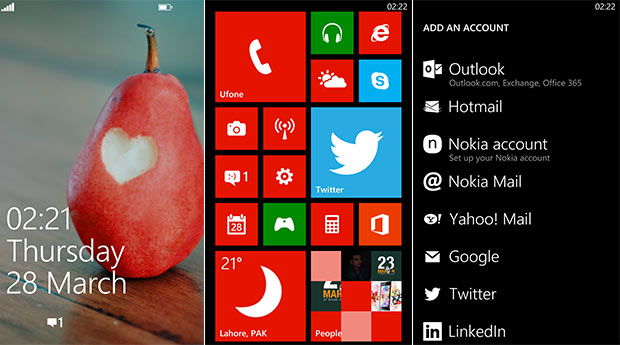 After switching on the phone, you are welcomed by the lock screen, which shows Date and Time and can show information from your Facebook or other apps like Outlook, Calendar. The home screen is filled with a number of live tiles, which can be moved, removed and re-sized by holding down on them. Swipe to left and you have all the apps – you can also use the search function if you have installed many of them.

Just like the previous version of Windows Phone, the newer OS also has the Social network integration and your Contacts, Messages, Facebook, Twitter and Outlook all are interlinked.

You’ll also get NFC and a pre-loaded “Tap and Send” app. This feature can be used with any NFC enabled device, like the JBL PlayUp speakers we reviewed last week.

Nokia Lumia 920 is also 4G enabled, but it has no use in Pakistan since we are still waiting for 3G to arrive. This phone is equipped with Explorer 10, which comes with a better HTML 5 support but sadly there is no Flash support.

Panning and zooming on pages is very smooth. IE 10 supports tabbed browsing but you will have to navigate to the menu to open every new tab. (Check Video at the end)

Thanks to the large screen, powerful processor, and super-sensitive touchscreen, the overall experience on this phone is great, there is no visible lag, no force crashes and with 32GB of storage you won’t notice the lack of SD card slot. 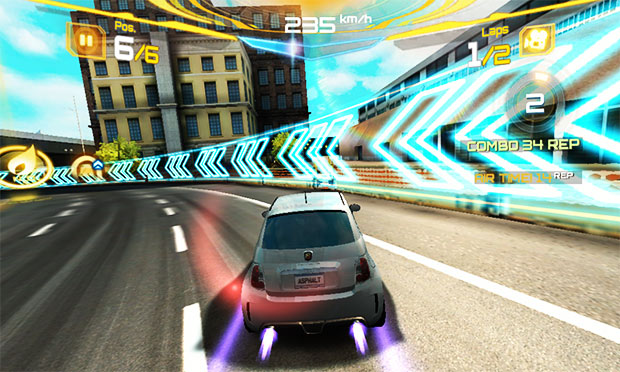 The Gaming experience on this phone is satisfactory, most of games available on Windows Phone Store are designed for a lower resolution and there isn’t a huge library like Android or iOS, but some titles like Angry Birds, Fruit Ninja and Asphalt 7 are fun to play.

Most of applications are paid but you can still try them for free. When you’re signed in with your Xbox LIVE account you can also enjoy multiplayer games, and interact with your avatar.

The Nokia Lumia 920 comes with an 8MP, Carl Zeiss lens powered by dual LED flash on the back and a 1.3MP front facing camera for video calling.

The rear camera features Nokia’s Pureview technology which was first featured on the 41MP Nokia 808. The Pureview technology provides optical stabilization and incredible performance in low-light conditions. The Camera allows 4x digital Zoom, for which you have to pinch the screen to use the feature, unlike most of phones where volume rockers ares used to zoom in or out.

The performance is quite amazing, and the Camera works well in both day and night. The shutter button provides a more natural way of capturing photos and you can quickly open the Camera app from lock screen by pressing this button. 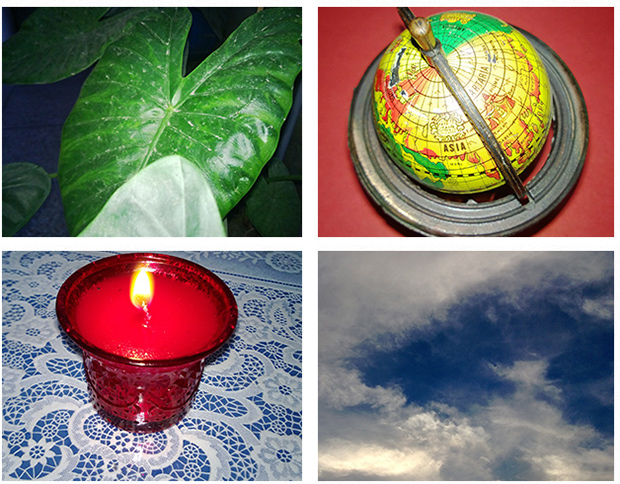 The camera app itself is pretty basic but you can download additional apps like Creative studio, Panorama, Cinemagraph and Smart shot for enhanced experience.

There are even less options to play with in the video recorder on the Nokia Lumia 920, you can capture 1080p or 780p videos. Sadly there is no zoom option available while recording videos but you can use the dual LED flash light while recording the videos.

Photos and videos can also be set to automatically upload to your free SkyDrive cloud storage space.

The phone is packed with a non-removable 2,000mAh battery which Nokia claims to offer 17 hours of talk time. Unfortunately the battery does not live up to expectations, and hardly gives you a single day with careful usage. 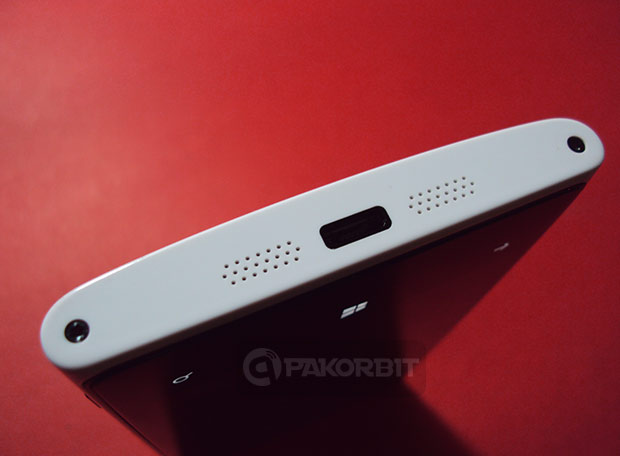 It runs out of juice quickly and if you are using Wi-Fi or playing games then expect even worse. Sadly the “Battery Saver” feature doesn’t work well on Lumia 920 and makes no difference at all.

You can also buy this phone from Mobilink, which recently joined hands with Nokia to promote Lumia series in Pakistan. Mobilink is also offering Fatboy wireless charger and 1GB of Mobile Internet for free.

Lumia 920 is a very solid and well-built device, it’s a great piece of hardware, and one of the best Windows Phone 8 devices you can buy. The screen is excellent, it looks fresh and distinct and provides a smooth and fluid user experience – also the camera performance is simply marvelous. 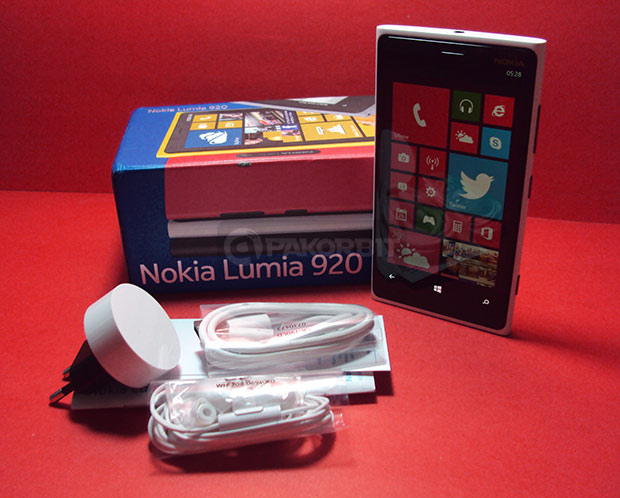 Nokia Lumia 920 comes with some cons too, it’s very big and bulky and has a short battery life. Also the Windows Phone OS doesn’t offer much freedom and apps as compared to its rivals.

So if you are willing to buy a Windows Phone smartphone and have no budget limitations, your first choice should be the Nokia Lumia 920.

Have a look at the unboxing and hands-on video of Lumia 920: