Continuing its tradition, OPPO is releasing teaser images of its upcoming flagship device, the N3. However this time company has decided to keep mum about the specifications of this device which will be unveiled at the end of this month in Singapore.

We all know its the N-series phone, so it will come with a swivel camera, like it’s predecessors N1 & N1 mini. To prove this speculation right, OPPO has released teaser today which features the swivel camera and almost 40% of the backside. 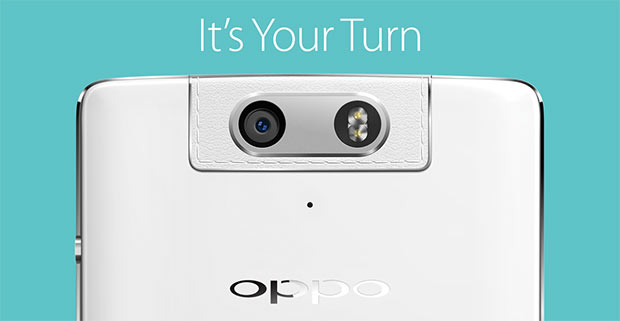 The image which comes with a tagline “It’s Your Turn” focus on the rotating camera. You can see that its pretty much the same thing as we’ve seen on N1 and N1 mini, but there are some differences. Like it has a dual LED flash, the rotating block has a faux leather appearance (very similar to Samsung Note 3) and the camera unit is separated from the block through shinny metal around it.

Other than the camera the image reveals the noise-cancellation mic on the back with the regular shinny OPPO logo. The previous teaser confirms that device will be available in two different materials ─ stainless steel and an aluminum-lithium alloy. Though the image above is a digital render, howbeit we can deduce that it has a plastic back cover. So it means that there will be three materials to choose from.

The frame of the phone looks less round and on the side it features a circular button or may be its the headphones jack. To find out more details and some info about the specifications of this device we’ve to wait for another teaser.