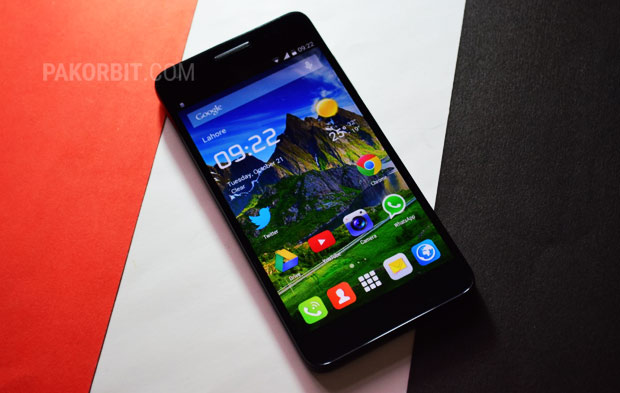 Voice has recently re-launched its flagship octa-core smartphone, Xtreme X5 in Pakistan. It is an elegant & sumptuous device ─ packed with some pretty powerful hardware.

I’ve got the chance to use this device for a couple of weeks and here we are with a detailed review. In case you’ve missed the un-boxing you can watch it first.

There is a general perception about local brands that their smartphones aren’t of good quality and some cheap materials are used in their construction, I assure you it’s not the case with this device.

First impressions of X5 suggests that it is a high-end plastic phone with a generic design. It looks quite similar to some of the new phones from Huawei but with more rounded corners. We’ve got the white version which closely resembles the Ascend G7 and Honor 3C. 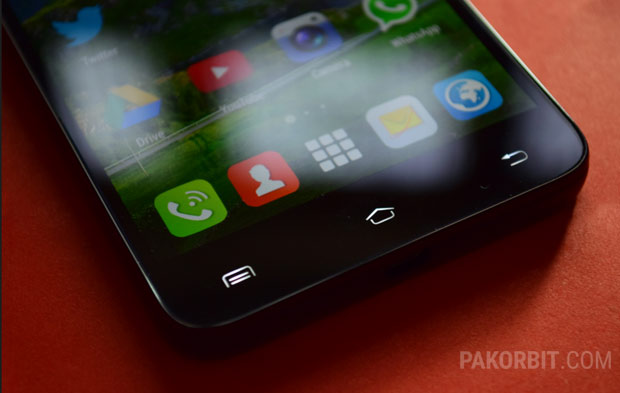 The dimensions of this phone are 141mm x 69.3 mm and it is just 8.7mm thin. The camera is slightly raised on the back, but the one thing I love about this phone is that it is very light weight.

The plastic construction allows it to be sturdy and durable. If you accidentally drop the phone from your pocket or less height, which I did; there won’t be any visible damage. 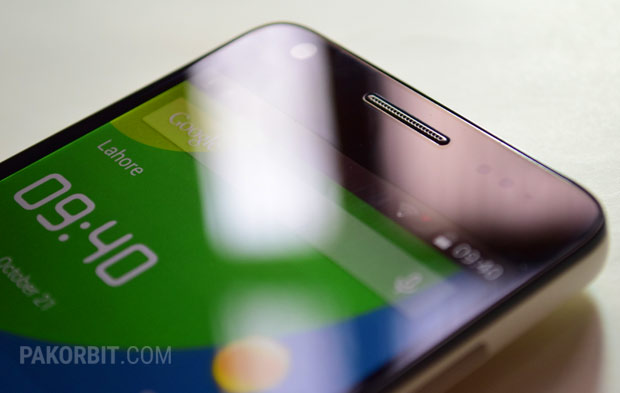 As I mentioned earlier it has a generic design, however the width is a little less, which gives it tallish looks.

The front side is dominated by the 5-inch IPS Crystal display with 1080p resolution (480ppi pixel density). It is quite sharp and provides higher color saturation. To my surprise the screen is legible in outdoors and under direct sunlight. It is also very responsive and a slightest touch will get the things done. I would say that the screen quality is the best feature of this phone. 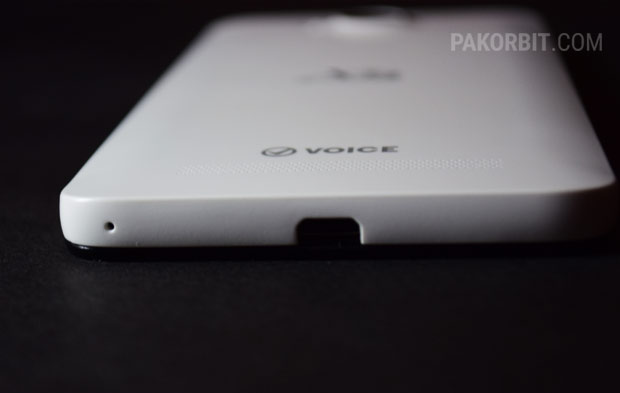 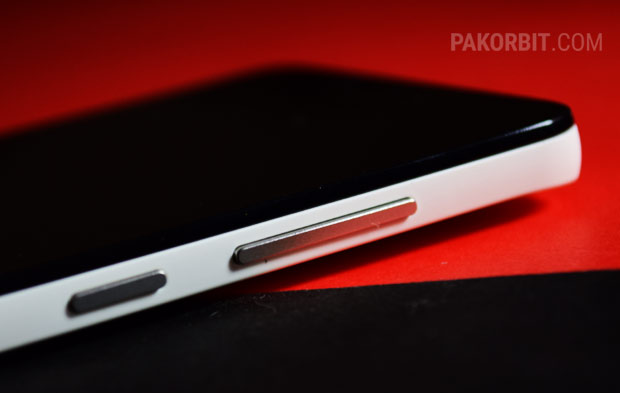 The volume rocker and the power/unlock key are on the right. These keys are slightly raised and positioned to be easily used by one hand. USB port and microphone are on the bottom, whereas the 3.5mm headphones jack and noise cancellation microphone is on top. 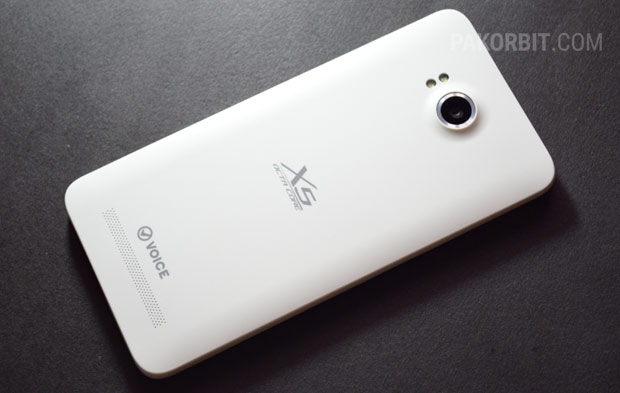 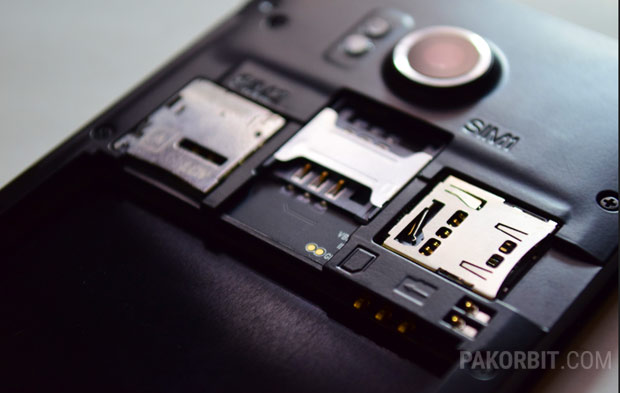 The back of the phone features the primary 13-megapixel snapper along with dual LED flash light. Voice X5 octa-core logo is quite prominent in the middle and a large speaker grille can be seen near the bottom.

Under the hood there are 2 SIM card and 1 microSD card slots along with the battery compartment. It takes one mini and one micro SIM card; the good news is that you can use 3G on both SIMs. There’s a NFC chip embedded on the back cover. 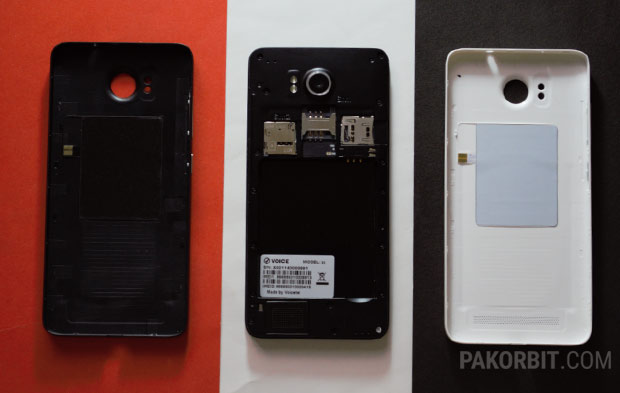 The overall design and build quality of this phone is quite remarkable, however I feel that a touch of metal would have given it more premium feel.

When the company launched this phone nearly 8 months ago, it was bundled with Android 4.2 Jelly Bean operating system and a custom skin on top of it. However with the re-launch it brings Android 4.4 KitKat with almost no major customizations. 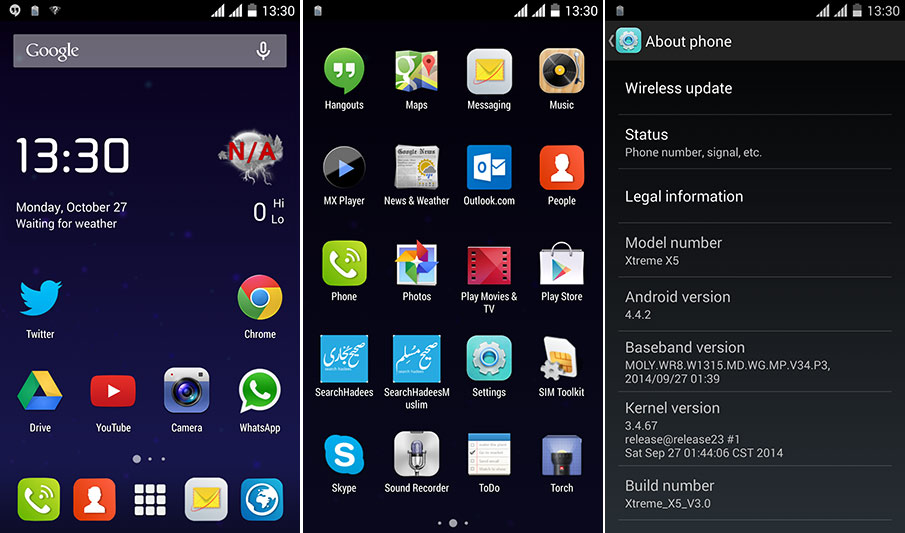 Other than the boot up animation and a little makeover of icons, nothing has been changed and you’ll get the pure Android experience. I am a big fan of Vanilla Android as the fancy customizations like TouchWiz on Samsung, EMUI on Huawei etc use much resources and makes your phone sluggish. 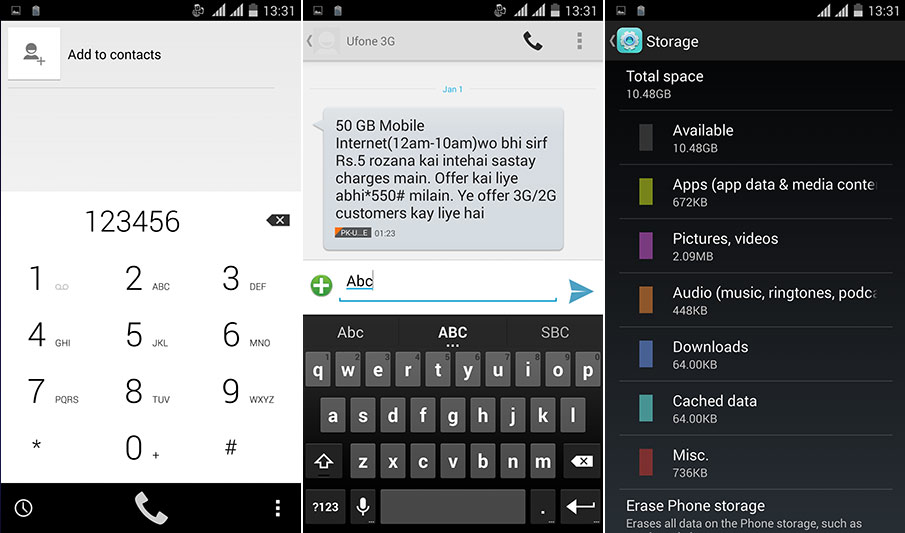 However there is one app I particularly don’t like, named as “Assistive Touch” this application provides gesture support, something similar as we’ve seen on ColorOS. It provides you quick access to some basic functions and you can start applications by drawing custom gestures on the screen. It sounds pretty interesting, however the on screen circular widget of this application is quite annoying as it always remains on top.

Voice X5 has 16GB on board storage, some of this space is filled by system files so a user will get around 11GB free space on the phone. You can use an SD card up to 32GB with it and can select it as the primary storage.

It supports OTA updates and you’ll get the software update notification when you first connect it to the Internet. Currently its running Android 4.4.2 and I think it will take a long time for this device to get Android 5.0 Lollipop. 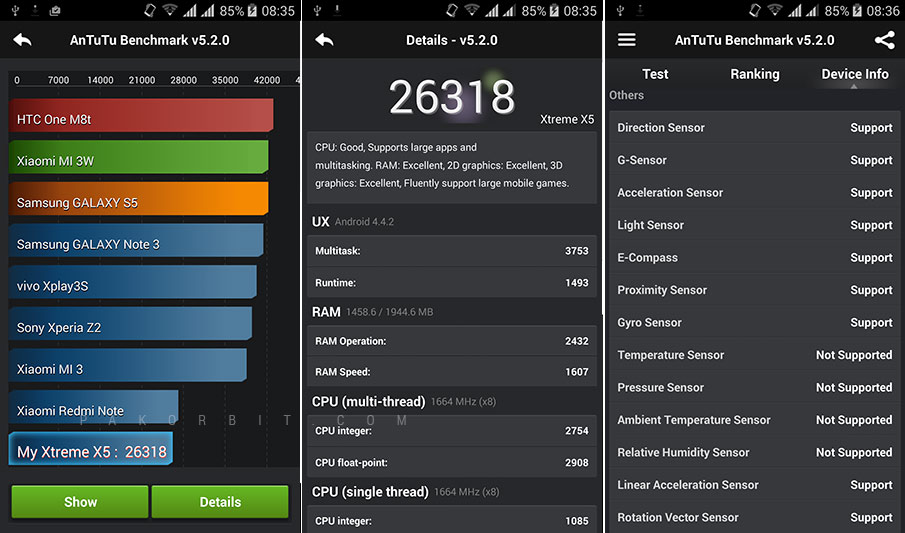 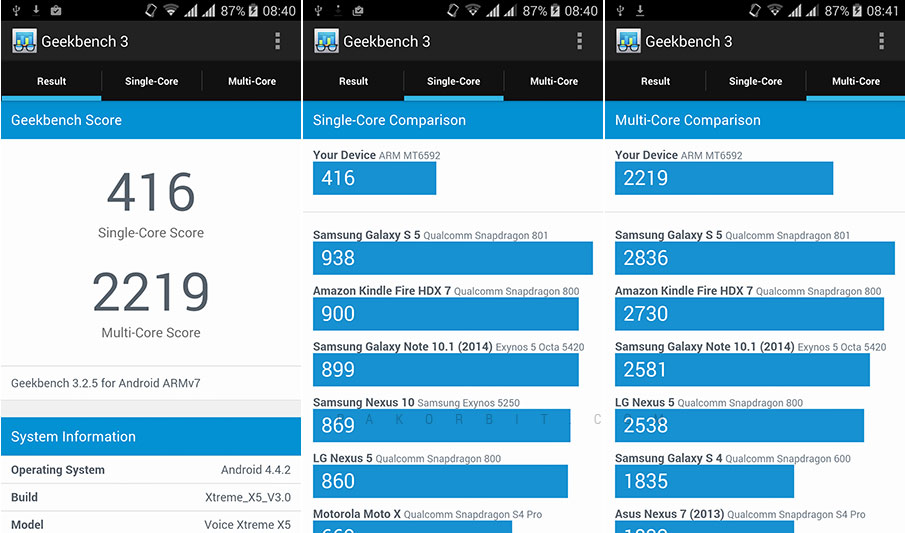 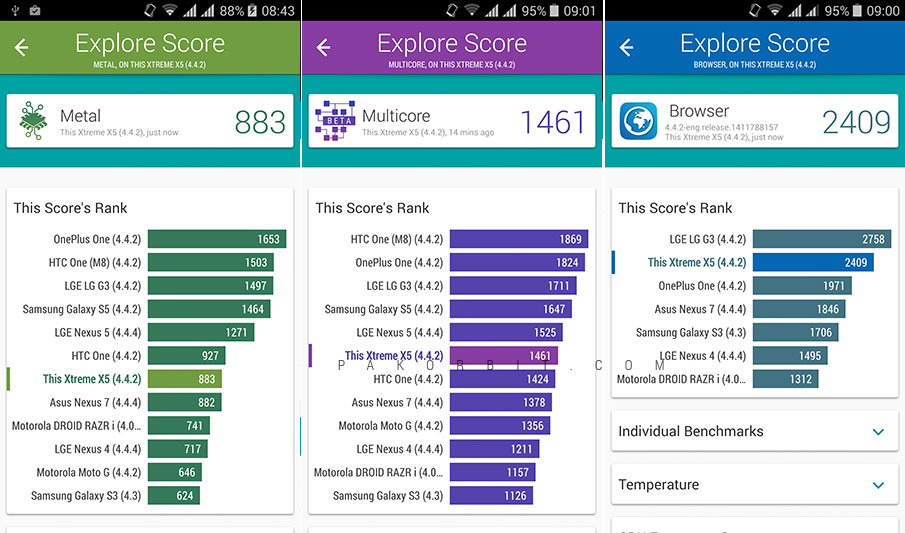 The benchmark results as compared to other flagships aren’t so promising but the actual performance is quite satisfactory and lag free. Occasionally during a call the screen becomes unresponsive, however this problem may be limited to our review unit only and I think that a software patch might fix it.

On the other hand, the gaming experience on this device is very pleasing. You won’t notice any lag or jitteriness during gameplay and it can run all of your latest 3D games without breaking a sweat. You can also watch 1080p videos on this device without having to install any other media player.

The call quality on both, cellular network and VoIP is sharp and clear. It doesn’t have 4G support but what you can do is use 3G on both SIMs. This phone also has NFC feature enabled, so you can transfer files with a tap or use the NFC tags for quick settings.

The camera performance isn’t so remarkable, however it manages to capture some nice shots in outdoors and well-lit conditions. Despite the fact that it features dual LED flash light, I won’t recommend using a flash unless you’ve to, as it overexposes the subject. 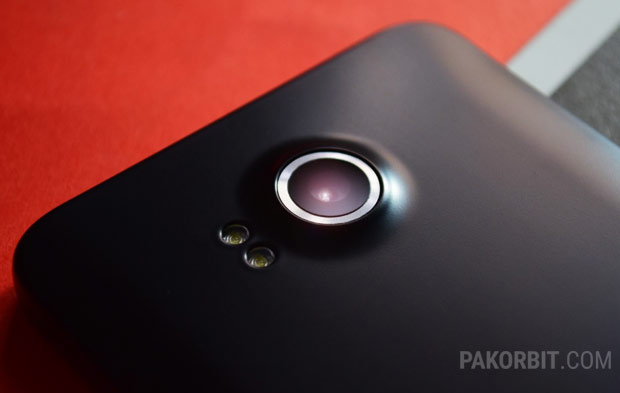 The image quality of the primary camera looks good on both mobile and computer screens and a 13-megapixel image takes 2-3 MB space on the phone. The front facing camera also takes good shots and works well during video calls, however the images from this camera seems a little a little blurry or soft.

The camera interface is quite simple and puts all of the quick settings on the screen, however personally I like a clean interface with less distractions. The image taking process is fast and easy, press the shutter button to take still images or the movie button to start recording videos.

The primary can record 1080p videos at 30fps but the front facing camera is only limited to VGA videos. 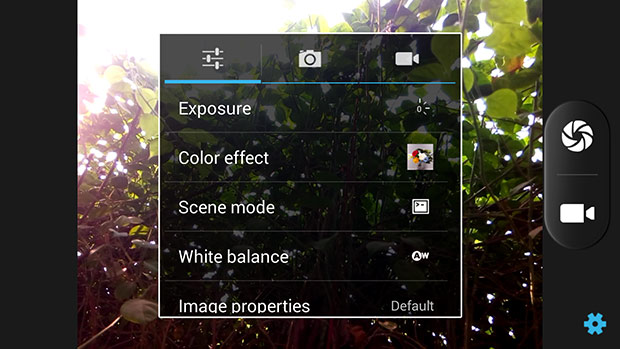 The camera application allows voice commands and offers a set of filters and scene modes to make the process simpler.

Have a look at some of the sample images taken with X5, click on the image to see in high resolution: 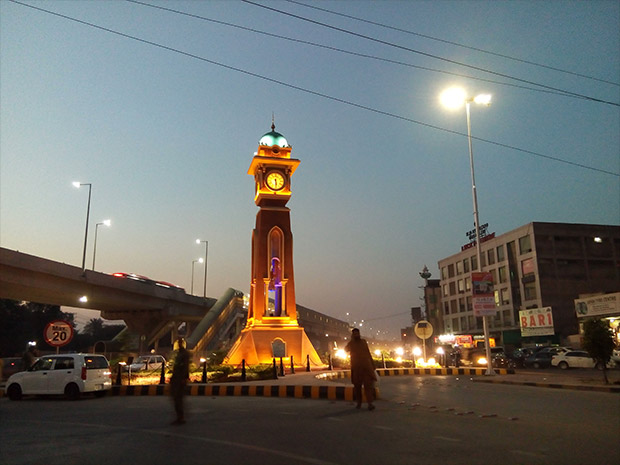 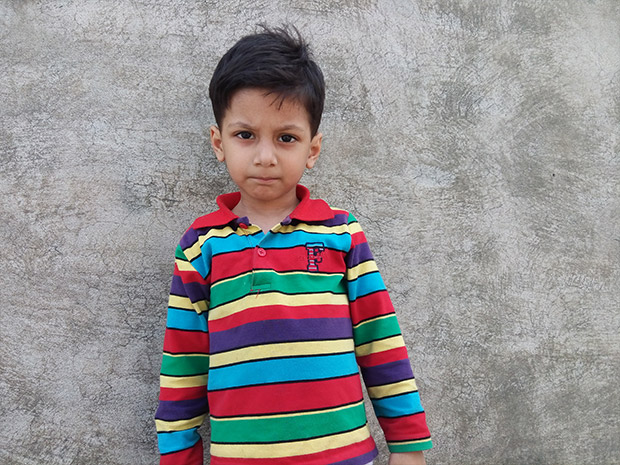 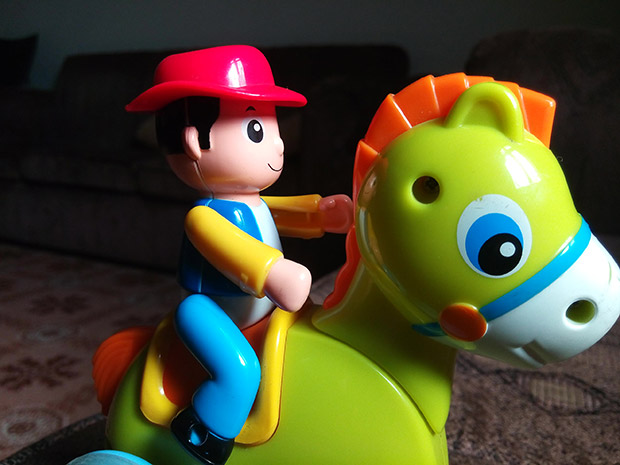 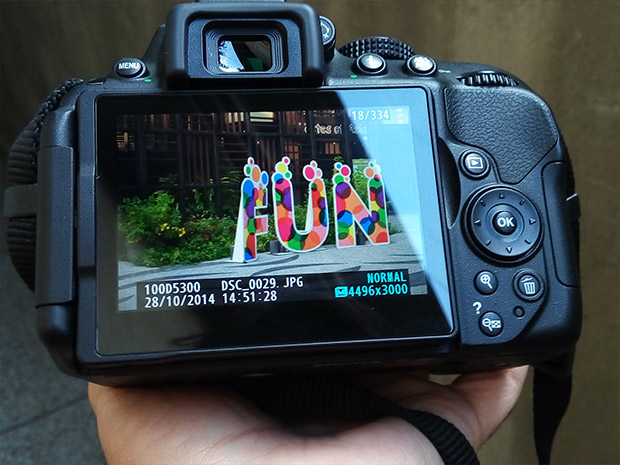 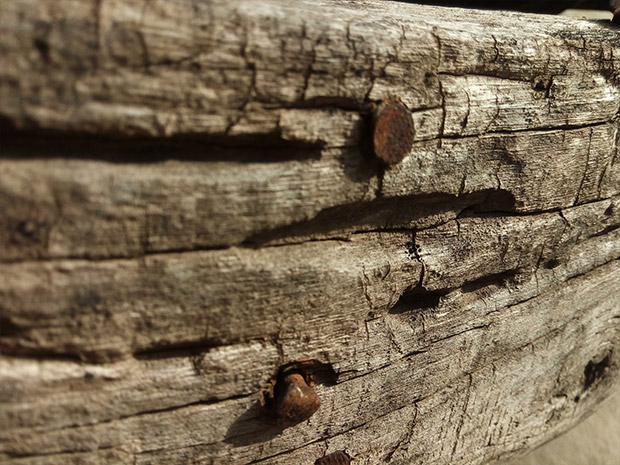 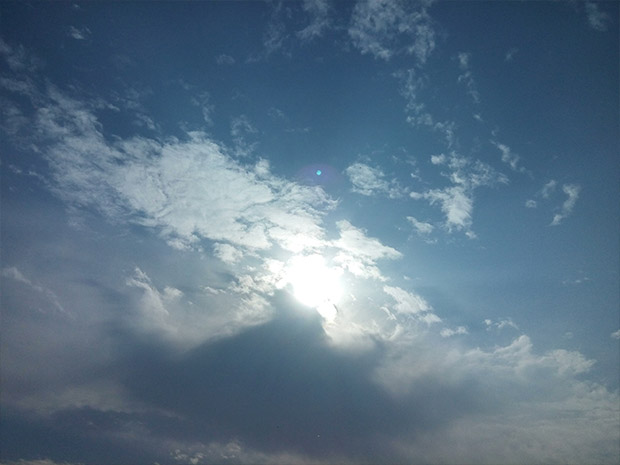 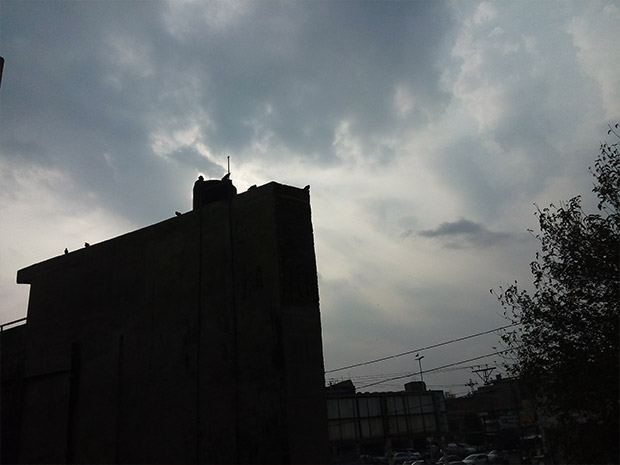 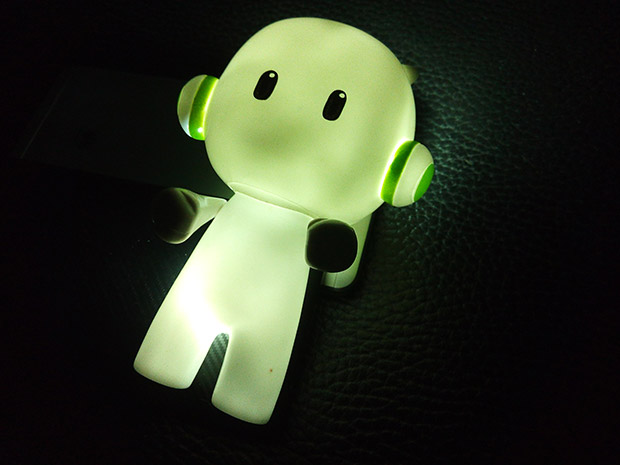 The battery life of this device isn’t so impressive, packed with a 2000mAh Lithium-ion battery; it seems quite short. If you’re not careful with the battery consumption, you’ll need to charge it overnight. 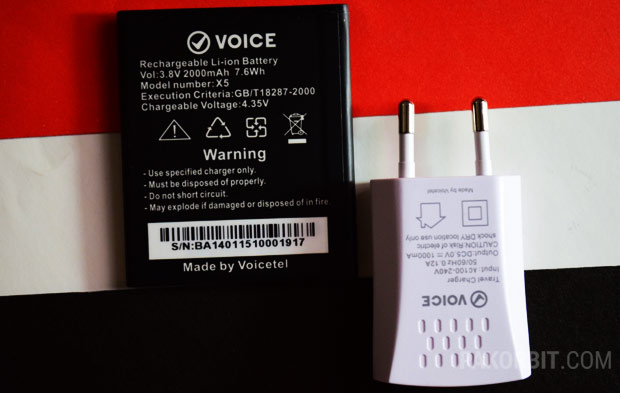 In our tests the battery seems to do well, while watching videos or surfing the internet. You can easily watch movies or play games for almost 5 hours after a single charge, however once the battery drops down to 15%, it runs out of juice in just a couple of minutes.

The phone offers a power-saving mode, which allows to reduce battery consumption by disabling wireless networks and unnecessary features, however even with a careful usage you won’t get more than day as the phone consumes much battery on the standby.

It takes almost 2 hours and 15 minutes to fully charge the device with the wall charger provided in the box, you can also charge it by plugging the USB cable in your computer / laptop.

Voice X5 is available all over Pakistan at a price of Rs. 29800 with one year warranty of United Mobile. Currently this phone is sold in three colors, black white and grey. You’ll get an extra cover and protective case free of cost. 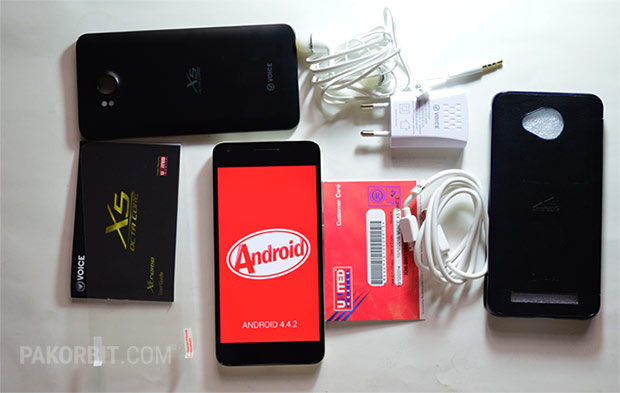 Voice X5 has a great design and feels nice in the hands, as I mentioned earlier the best feature of this phone is its screen. It is very sharp and make the images look alive. This device may not be the best performer but it boasts some impressive hardware and the camera quality is up to par.

The things I didn’t like about this phone are the short battery life and software bugs, other than that ─ Voice X5 is worth the money. 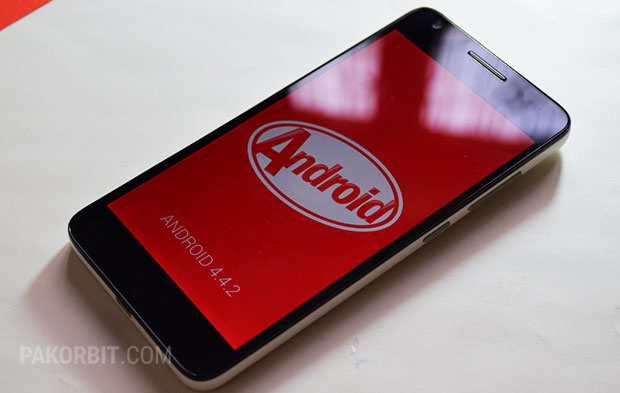 There are however many alternates available in this price range, offering slightly better performance and a well-known brand name. So like always its up to you to decide which phone you should buy.

Do share your opinion about this phone in the comments section below and if you have any questions, we would love to answer your queries. 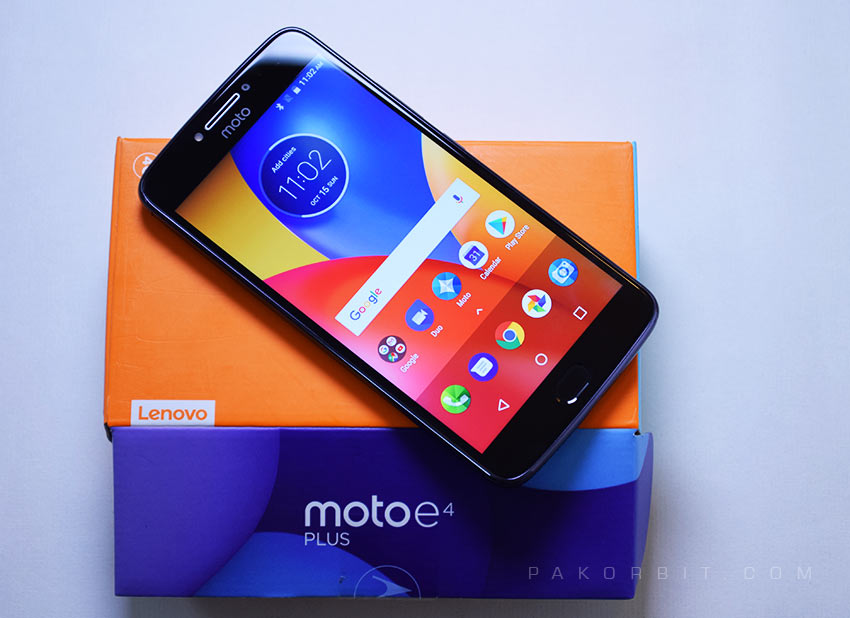 Lenovo acquired Motorola Mobility from Google back in 2014 and decided to kill the iconic ...
By PO Staff
February 18, 2018 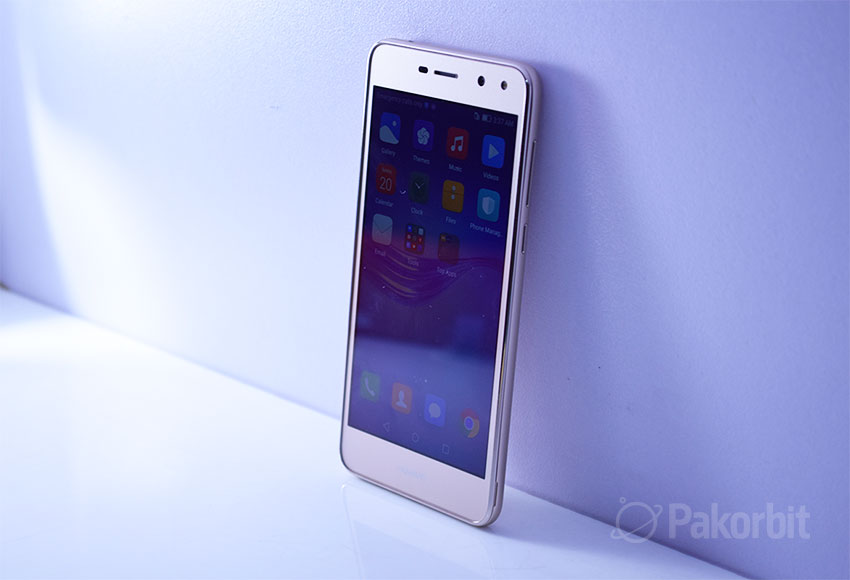 Huawei has launched over a dozen smartphones this year & while the flagships made it ...
By Saqib Khan
October 2, 2017 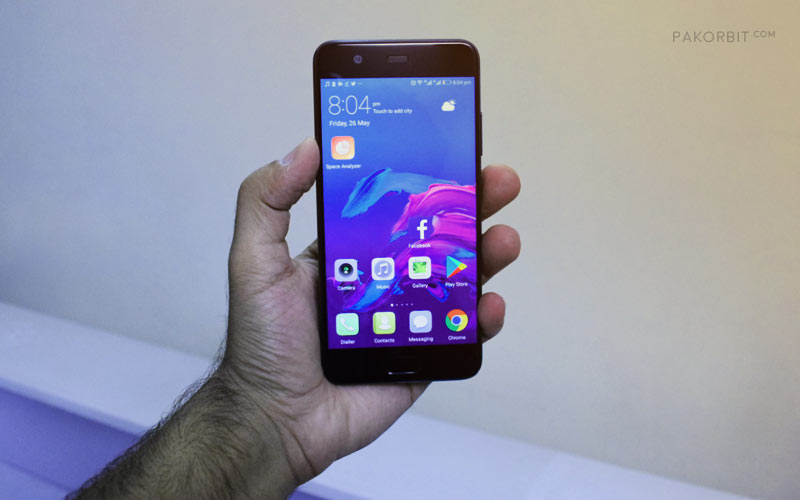 In the past couple of years Huawei has emerged as one of the best smartphone ...
By Zohair Chohan
June 14, 2017 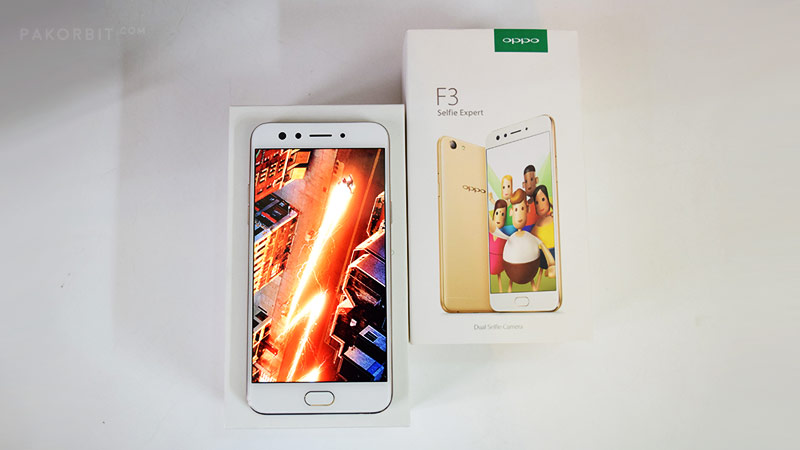 In the last couple of years, OPPO got phenomenal success in Asia and Africa, that’s because ...
By Zohair Chohan
May 19, 2017

Pakistan is lagging behind when it comes to modern payment systems ─ while other countries have ...
By Zohair Chohan
April 6, 2017